We offer two sizes of HDPE Snowsled pulks which are designed to perform to below -35 degrees C.

The Trail pulk is smaller and the go to size for those undertaking expeditions where the load is less than 50kg. If, however, your load is more than 25kg, we advise you use a baseboard in your pulk. This helps to spread the load more evenly over the base of the pulk and reduce point loading. These are made of oiled birch ply and are cut to fit into the base of the Trail Pulk.

The Expedition pulk is larger and has a greater load carrying capability of up to 100kg. 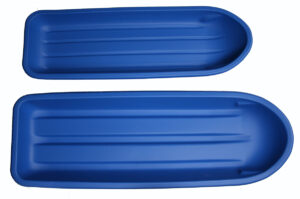 Even if you have a smaller load, you may choose to use a larger Expedition shell for the following reasons;

Conversely, if your load is too big/heavy for a Trail shell, you might choose to use two Trail shells instead of a larger Expedition shell. (Note: if you are hauling huge loads it is of course possible to haul two Expedition pulks – if considering this we advise either therapy, or at the very least booking some physiotherapy sessions for when you get back!).

The two pulks can be hauled either behind one another (train setup) or in tandem, as appropriate. If man-hauling, the train setup is generally more effective as the one pulk breaks trail for the other, however, if using kites, hauling in tandem is preferable as the rafted pulks create a very stable “Catamaran” style platform which is very hard to flip over. Depending on what you are carrying, the pulks will usually get lighter and emptier throughout the journey as food and fuel are used. It might then be possible to stow/stack one pulk inside the other, greatly reducing the drag (though obviously not as stable for kiting). 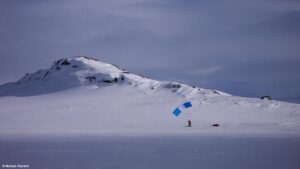 Two smaller sleds may also be an advantage if: