From the 1st June 2017 Aiguille took over the manufacture and distribution of ‘Snowsled’ pulks, hauling equipment and the Mountain Rescue Vacuum Mattress. 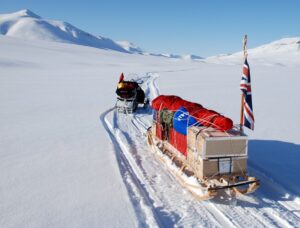 Snowsled was established in 1988 and began by making Nansen sledges for the British Antarctic Survey and also Kevlar pulks.

Since then Snowsled manufactured for a whole range of polar travellers and adventure seekers. Customers included expeditions combining science and fun with governments and universities around the world needing equipment for collaborative research programmes.

All products were ‘Made in Britain’; sleds and all sewn items were produced ‘in-house’, giving both the benefit of quality control and the advantage of being able to respond fast to unusual requests. 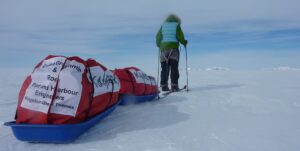 In 2007 Snowsled produced the first HDPE. These plastic pulks have since risen in recognition as they proved themselves to be a cheaper, more user friendly and equally efficient alternative to composite pulks.

They also developed and manufactured equipment for the emergency rescue services, including the full-body vacuum mattress. This was developed specially for the Mountain Rescue Committee of England and Wales and the design has been in commission for over 20 years.

Aiguille have now moved production of the HDPE pulks and Mountain Rescue vacuum mattresses to Cumbria alongside our existing outdoor equipment production. We are relishing the challenge of continuing to develop this exciting product range.