You might think that by the grand old age of 33 we had started to slow down a bit…develop back pain and have arthritic ankles! But no, there is life in Aiguille yet!

In 2016, we had a complete re-build of our website and on-line shop. We think it was a vast improvement and hopefully made it much easier for you to find information quickly and easily. In 2017, we had two new exciting developments. Firstly, as of the 1st June 2017 Aiguille took over the manufacture and distribution of Snowsled pulks and equipment. This also included the Mountain Rescue approved vacuum mattress which is in our Rescue & Industrial range.
Snowsled was a small manufacturing company based near Gloucester. They had been making pulks and associated polar gear for nearly as long as we have been making rucksacks. The time had come, however, to move on as Roger, a founding member and the Managing Director of Snowsled, had decided to retire. We took on his well-established brand of high quality functional products and are keeping them alive through our product range Aiguille-Snowsled Polar. Secondly, in response to an apparent increase of interest in Big Wall climbing, we re-launched our Big Wall Range which was last produced in late 1999. Things had moved on a bit in 17 years and so having dragged out our old portaledges, haul bags and gear, everything had a good overhaul and re-design.We tested prototypes (really hard work in Yosemite!) and developed ideas which are now available for purchase in our Big Wall Gear range.

Incidentally, the ledge shown here that “Paddy the Penguin” is contemplating spending the night on is a titanium ledge, produced in the early 90’s. 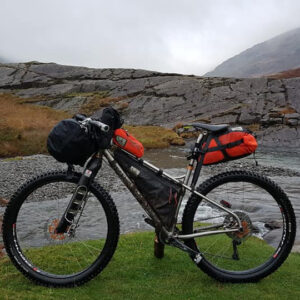 2018/19 saw the introduction of our new Bike range. With our long-standing team member Anne being the expert on all things bike related we launched a range of bags for everyday commuters and bike packers alike. This new venture meant we now supply equipment for a multitude of different sports, audiences and activities. 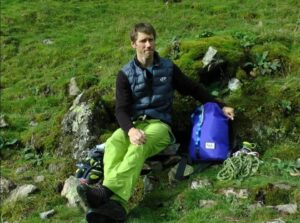 More recently, towards the end of 2019 we ascertained our very first Aiguille Athlete! Craig Matheson is a well renowned Lake District based climber and one of a minority of climbers climbing in the very top grades of British traditional climbing. Born and bred in the Lake District, Craig embodies the values and traditions of British trad in a way which we feel few others are doing. Craig works very hard to be able to do this whilst also having a full time, “real world” job and raising a young family. As some of us here at Aiguille are Lakes based trad climbers, we are happy to to be able to support Craig in his climbing and feel that his grade should increase very rapidly now he is using an Aiguille Chalk bag!